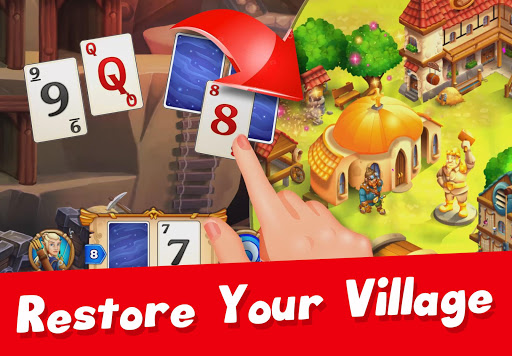 The evil Deckromancer has stolen the suits from the Deck of Power. The Kingdom of Hearts is in grave danger, unless a hero steps forward!
Join Arthur as he pushes back the dark forces, and battles the Deckromancer to retrieve the stolen suits. The fate of the land lies in your hands: restore the Kingdom to its former glorious state, in this exciting adventure of magic and lore.
Solitaire: Arthur’s Tale is a beautifully themed solitaire adventure game based on classic Klondike, Pyramid, FreeCell, Tri-peaks and Spider solitaire games you already love to play!

• Play socially and get rewarded!
• Win coins in the Daily Quest and climb the ranks of the Crown Leaderboard.
• Team up with your Facebook friends and embark on this great adventure.
• Hundreds of levels and counting!
• Unleash powerful boosters to help with challenging levels.
• Enjoy amazing themed live events!
• Play quick, addictive and fun levels, as you harvest grand rewards and rebuild the Kingdom.
• A unique crossover experience between a builder game and solitaire.
• Fun, free and easy to play!

Enjoy the limitless adventure in your quest to defeat the evil Deckromancer.
It’s time for a hero to step forward, what are you waiting for?